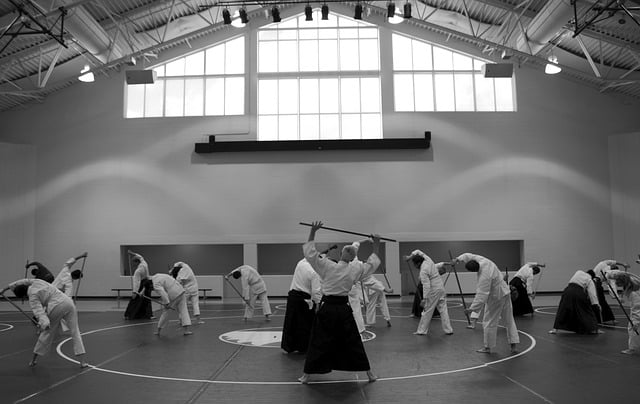 Easy to learn vs hard to master

Anybody can take Aikido classes. You don’t need to be strong or tough. You can be young, or old; male or female; big or small. Also, the aikido crowd is a particularly friendly kind of bunch. They won’t rough you up, or wear you down. So Aikido classes are accessible to anyone.

And exactly this ‘ friendliness can be a disadvantage if you are looking to level up your martial arts skills. To make Aikido work as intended, you will need a lot of ‘ friendly’ practice. And you need to be very self-aware to make your practice count as any kind of realistic self-defense training. So, if realistic self-defense is your first concern, then there are other martial arts, like Krav Maga for instance, that are better suited.

You can be a black belt in a few years, but It will take a lifetime to master Aikido and become an effective fighter. Then again, this is not the primary goal of Aikido.

Aikido has many health benefits. It helps to relieve and manage stress. It helps you train your breathing. It builds strength, stamina, endurance, and flexibility. Of course, the same thing can be said of many other sports and martial arts. Still, one of the most beneficial practices that you will find in Aikido is the coordination of your breathing with your movements. I always feel like it is an internal massage, that is very quickening.

On the other hand, Aikido can put a strain on joints. I know older Aikidoka (Aikido-practitioners) that are dealing with worn-out hips, shoulders, and knees. This is because many of the movements in Aikido are done by generating force while turning the hips. Many techniques are performed on the arms and shoulders of the opponent. Also, a large volume of techniques is performed on the ground while kneeling (Ne-Waza). The key here is to not overtrain, be aware and be kind.

This is not just a risk specific to Aikido, but all martial arts in general.

Aikido is a Japanese martial art and therefore has spiritual roots in Shintoism. This is reflected in the etiquettes and rituals most dojos still uphold. Aikido is all about finding harmony with yourself, your opponents, and your surroundings. The same is more or less the case for other Japanese martial arts like Judo, or Karate. Aikido has also incorporated the concept of Ki (AKA Chi) in the practice. Ki can be loosely translated into inner force or energy. For many schools, Ki has a spiritual component, while for others it is mostly about biomechanics. Still, many practitioners are attracted to Aikido because of its large spiritual component. Ki-Aikido is a form of Aikido that focuses heavily on the Ki aspect of Aikido.

Being effective is not the goal at most Aikido schools. This does not mean that it cannot be effective. It means that the focus of most training sessions is not on self-defense, let alone on being offensive. Just compare this with Kickboxing or Muay Thai, which are mostly offensive.

I believe it is possible to combine the spiritual with the effective, but most schools focus more on the spiritual aspects of Aikido.

Focussed on self-defense vs less focus on striking and kicking

Depending on your personality, you might be attracted to Aikido, because it appears to be focused on self-defense as it looks like in Aikido the practitioner never initiates an attack with strikes or kicks.

However, the founder of Aikido, Morihei Ueshiba, once said: 90% of Aikido is atemi. This means 90% of Aikido is striking. So you might see it as an advantage that Aikido is not so much about striking and kicking, only to find out as you practice that this is not the case.

It is true, that when we practice on a lower level, strikes are not emphasized in many schools. But as you advance, you will find out that (the thread of) strikes and kicks are necessary to subdue a non-cooperating opponent. The mastery is to know how to apply just enough force, so everyone can remain calm and unharmed.

Because of this notion of striking in Aikido, it is beneficial for every Aikidoka to practice, or have practiced other striking arts, like Boxing, Wing Chun, Karate, etc.

No competition vs sparing

In all but one Aikido-style, there is no competition. This is actually what guides most people on the path to Aikido as their martial art.

However, during training, we do spare in Aikido. This is mostly highly choreographed and limited to one or a few specific techniques at a time. This means that there is no or only limited pressure testing of the skills of the aikidoka.

Again, depending on your goals and personality, you might see this as an advantage or either a disadvantage.

Of course, Aikido is very light on the pressure testing, if it is done at all, compared to BJJ, MMA, Judo, and Jiujitsu, just to name a few other martial arts.

Many dojos vs hard to find the right dojo

Aikido is one of the most practiced martial arts in the world. You will always be able to find a school near you. Also if you are traveling, or living abroad, going to a dojo is a great way to meet like-minded people.

If you are looking for a dojo it can be a challenge to find the one that is right for you. There are many nuances in the practice, depending on the dojo, or even a single teacher in that dojo. If you are just starting to learn Aikido, my suggestion is to stick to one teacher until you are at a more advanced level. Else all the little nuances will only confuse you.

I have yet to find an Aikido dojo with people I do not like. Aikido attracts people from all walks of life, but there is always a connection through the practice of martial arts.

As people come together to practice and train, they will tend to organize. And where there is an organization, there is politics. In the world of Aikido, there are many associations/affiliations. It can be difficult sometimes to choose one and your choices can affect your ability to obtain higher grades. The higher up you get, the more it becomes a question of politics.

Like many things in life, Aikido is easy to learn and hard to master. I have been practicing Aikido for 20+ years and finally feel I am achieving Aikido Mastery. Please consider following this blog and our Youtube channel to learn more about Aikido and Budo in general as I share my experience and insights. You can check out my Budo resume here.